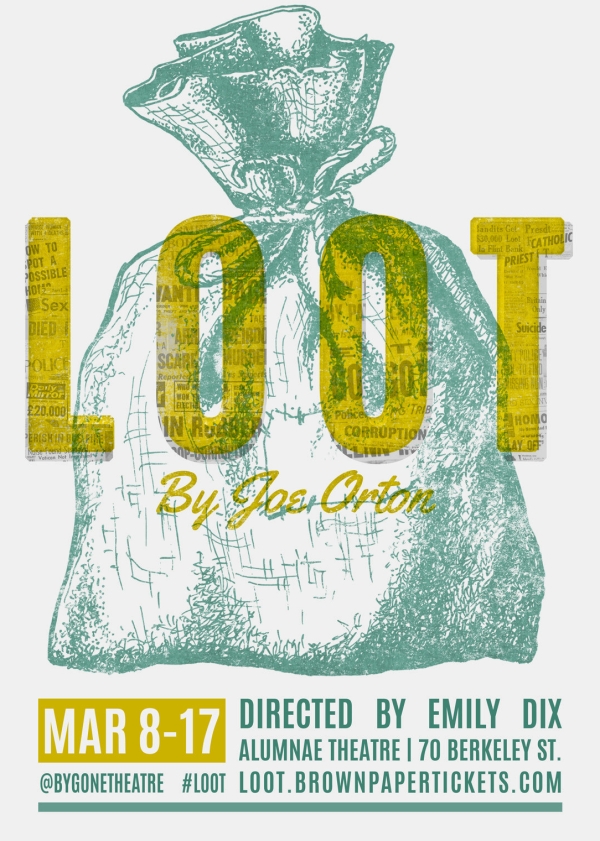 It’s that time again! Bygone Theatre is holding auditions for its upcoming production of LOOT – here’s everything you need to know;

THE SHOW
WHAT: Loot, by Joe Orton, directed by Emily Dix
WHEN:  March 8-17th, 2018 (11 performances)
WHERE: Alumnae Theatre mainstage
SYNOPSIS: Only hours before her intended burial, the late Mrs. McLeavy is removed from her coffin by her son, Hal, and his best pal, Dennis, who have together just robbed a bank and need the coffin to stash the loot. Absurdity abounds in the dark, 1965 farce that examines attitudes surrounding death, police integrity, and the Catholic church.

This production is non-union, profit-share, and eligible for the Dora Awards.

CHARACTERS
All characters require the use of a British accent and excellent comedic timing.

INSPECTOR TRUSCOTT – middle aged, British, the bumbling police detective, not above bribery and violence, embodies every negative stereotype of the police force

AUDITIONS
WHAT TO DO: Email director Emily Dix (emily@bygonetheatre.com) with your headshot and artistic resume, and the subject line “Loot Auditions” to request an audition
WHEN: Auditions will be held on Friday December 8th and Saturday December 9th; callbacks TBA.
WHERE: Audition location will be sent to those selected for an audition

REHEARSALS
Will take place in January and February on evenings and weekends. Expect a total of 80 rehearsal hours before getting into the venue (exact schedule is made up after casting to accommodate as many people as possible).

Bygone Theatre is holding auditions for its March production of HIS GIRL FRIDAY, running March 2-5, 2017. Directed by Emily Dix.

This is a non-union, profit-share production.

SYNOPSIS
This iconic screwball comedy tells the tale of Walter Burns, a hard-boiled newspaper editor who learns that his ex-wife, “newspaper man” Hildy Johnson, is going to give-up reporting to marry a bland insurance salesman from Albany. Determined to sabotage these plans and keep Hildy with the paper (and himself), Burns convinces her to cover one last story; the execution of cop-killer Earl Williams. Things quickly spiral out of control and Burns and Hildy find themselves tangled up in the case, and each other’s lives. A hilarious look at the struggle to balance life and love.

AUDITIONS
Bygone Theatre is holding auditions December 2 & 4, 2016. To request an audition slot, please send your headshot and artistic resume to director Emily Dix (emily@bygonetheatre). Those selected for an audition will be given a chance to sign up for a slot. Please note that this is a non-union, profit-share performance.

CHARACTERS
We are casting for the following characters; please note, we encourage submissions from actors of diverse cultures and backgrounds. Some smaller roles may be doubled, as indicated.

Kicking off our 2016/17 season is Retro Radio Hour – Creature Feature! Join us for an evening of vintage radio plays, oldies music, magic AND our season announcement – learn how you can get involved in our mainstage productions.

Show is on Monday October 24th at the Imperial Pub, 54 Dundas St. E. Doors open at 8pm, and as always tickets are only $5. Check out our Facebook event for more details.

GLORIA: Supporting, young girl, around 10 (**open to casting a child or a young looking woman, children under 18 must have parental consent). Stubborn & strong-willed.

SYNOPSIS
A sinister con man, Roat, and two ex-convicts, Mike and Carlino, are about to meet their match. They have traced the location of a mysterious doll, which they are much interested in, to the Greenwich Village apartment of Sam Hendrix and his blind wife, Susy. Sam had apparently been persuaded by a strange woman to transport the doll across the Canadian border, not knowing that sewn inside were several grams of heroin. When the woman is murdered the situation becomes more urgent. The con man and his ex-convicts, through a cleverly constructed deception, convince Susy that the police have implicated Sam in the woman’s murder, and the doll, which she believes is the key to his innocence, is evidence. She refuses to reveal its location, and with the help of a young neighbor, figures out she is the victim of a bizarre charade. But when Roat kills his associates, a deadly game of cat and mouse ensues between the two. Susy knows the only way to play fair is by her rules, so when darkness falls she turns off all the lights leaving both of them to maneuver in the dark until the game ends. (from Dramatist Play Service website).

AUDITIONS
To apply for an audition, send a recent headshot & artistic resume to director Emily Dix at emily@bygonetheatre.com, with the subject line: “Wait Until Dark Auditions”, no later than 5:00PM ON MONDAY FEBRUARY 1ST, 2016. Those selected to audition will be contacted via email to arrange a time.

Hey you! Ya, you! Have you ever dreamed of playing the circuit? Making it big on stage? Think you got what it takes to be a star of Vaudeville? Well then you’re in luck – forget those critics, Vaudeville ain’t dead! We’re breathing new life into it this June with Bygone Theatre’s…

We are currently accepting proposals for acts and are looking for the following;

Acts should be 3-8 minutes long and family friendly (keep it PG). We are looking for period appropriate, which for Vaudeville means 1890s-1930s, so keep that in mind when it comes to material, style and music – don’t worry about costumes, we’ll take care of those. Please note, only scripts and songs written before 1935 will be accepted.

At the moment we are looking for people with specific acts in mind; they don’t need to be completely polished, but we want to know what your source material is and your general concept. There may be an open casting call at a later date for those who want to be involved, but that will depend on this round of submissions.

What Else You Need To Know:

Spread the word and spread the love – Vaudeville is back!

We are casting for our upcoming production of “Rope”, to be performed at the Gibson House Museum in Toronto (near Shepherd Station) November 2014. There will be a total of 7 performances, taking place between November 21 and 29th. This show is non-union, non-paying; honorariums may be provided depending on the success of our fundraising and of the show.

SYNOPSIS:
An edge-of-your-seat suspense drama, Rope tells the story of two privileged young men, Brandon and James, who decide to murder a classmate for the sheer “thrill of it”. After hiding the body in a trunk in their living room, they throw a party, inviting the deceased’s friends and family (his father, Dr. Kentley, his sister, Miss Kentley, his friends Kenneth and Leila, and his TA, Rupert). Tensions build as the men struggle with gloating and guilt, leading to the eventual discovery of the crime by Rupert, their former TA.

**NOTE** As the play is now in public domain, we are making some adjustments to the characters. For an idea of the story, please read Patrick Hamilton’s “Rope” (1929). There may be some flexibility with minor characters in terms of age, race, and in the place of the maid, sex. Decisions will be made after auditions.

AUDITION PROCESS
If you are interested in auditioning for the show, send your headshot and resume to Artistic Director Emily Dix at Emily@bygonetheatre.com, by August 30.  Auditions will be held September 6 and 7th and details will be sent by email to those chosen for auditions.

We’ve got some new email addresses to help keep things organized! Be sure to add us to your contacts!

Our old address, bygonetheatre@hotmail.ca is set up to forward to our new one, so no worries if you forget, but in time we’ll phase that out, so be sure to get our new emails in your contact list!

Bygone Theatre is holding auditions for their upcoming production of Frederick Knott’s “Dial M For Murder”.

The show runs from August 15-17, 2013, with an 8:00pm evening show each night and a Saturday matinee at 2:00pm. It will be performed in the Robert Gill Theatre, at the corner of College and St. George in Toronto.

The show is non-union, non-paying.

Tony Wendice has married his wife, Margot, for her money and now plans to murder her for the same reason. He arranges the perfect murder. He blackmails a scoundrel he used to know into strangling her for a fee of one thousand pounds, and arranges a brilliant alibi for himself. Unfortunately…the murderer gets murdered and the victim survives. But this doesn’t baffle the husband: He sees his hireling’s death as an opportunity to have his wife convicted for the murder of the man who tried to murder her, and that is what almost happens. Luckily, the police inspector from Scotland Yard and a young man who is in love with the wife discover the truth, and in a scene of almost unbearable suspense they trap the husband into revealing his guilt, thus freeing Margot.

Tony Wendice: 30-38yrs, British accent an asset. A former professional tennis player, Tony is controlling, jealous and manipulative. He is slightly snobbish and very upper class. He plans an elaborate scheme to have his wife, Margot, killed because of jealousy over her affair with Max.

Margot Wendice: 25-30yrs old, British accent an asset. Margot is the charming and naïve wife of Tony. Margot has no idea that her husband knows of her affair with Max, and never suspects her husband of the least bit of wrongdoing.

Max Halliday: 25-35yrs. An American murder mystery writer, Max had an affair with Margot a year ago and is still in love with her. He is bright, charming, but decidedly middle class.

Captain Lesgate: 30-45yrs. An old college schoolmate of Tony’s and a convicted criminal. He is desperate for cash and has rather loose morals. He is hired to murder Margot.

Inspector Hubbard: 30-50. A British police inspector. A bit eccentric but ultimately a good man and a thorough, thoughtful detective.

Actors should prepare a brief (1-2 minute) monologue that is appropriate for the show (think about both the time period and the style). They may be asked to do a cold read, and should be familiar with the play. Please bring a headshot and a resume, and be prepared to fill out a form with your general availability.