Kill Sister, Kill! co-writer Drac Child shares a bit about the writing process, and gives us a brief history of the production.

Five years ago, my brother and I wrote Kill Sister Kill, then titled Sister, Sister (sorry Tia and Tamara); it was a simpler, shorter script with less-refined profanity, restrained displays of wanton violence and only five (!) songs. A lot has changed over the resulting period, including yet another version of the script for a 2013 production, an infusion of new music and lyrics and a new cast. Come 2015 and the addition of Bygone Theatre to the production, with an entirely new creative team, Kill Sister Kill is in it’s best shape yet. Imagine the past productions were Tim Allen on a coke bender: disgusting but funny, but looking worse for wear. This year, KSK is Jonah Hill in 21 Jump Street: increased stamina, better looks, yet still comically adept and more importantly, revolting.

My brother and I have been at this for awhile now; churning out scripts and making them into viewable entertainment is something we’ve done since childhood. I was tempted to say that the only thing that’s changed is that we fight less than we used to as kids, but that’s patently untrue. But, due to that history, our voices and ideas compliment each other; once the concept for a scene gets rolling, we just keep throwing dialogue at it until we’re both laughing or wincing. Year after year, Kill Sister Kill has always been a challenge, whether it’s tackling musical theatre for the first time, or producing shows with nothing but the small amounts of money in our staggeringly barren bank accounts, but this time, everything seemed to synchronize. The entire production is an assemblage of incalculable madness, but we’re all getting along and turning things around on time and no one’s died yet.

Want to help support the show? You can make a donation through our website or indiegogo campaign.

We are excited to announce that we will be teaming up with Kid Switchblade Productions to work on a dark new musical, Kill Sister Kill.

ABOUT THE SHOW: A nun, doing God’s work in the filthy streets of New York City in the late 1970s, reunites with her once-troubled sister to celebrate her engagement. The arrival of a vulgar, depraved punk and his kid brother despoils their happy reunion. After watching the murder of her sister and being brutally attacked herself, the Woman of God turns her attention to revenge, rebuilding herself as a hell-bent woman seeking vengeance.

The show premiered at the Toronto Fringe Festival in 2013 and is now being re-written and expanded with new music. Being produced by Bygone’s AD Emily Dix. 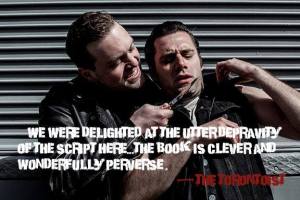 COMPANY INFO: Kid Switchblade Productions: If it isn’t offensive, it isn’t interesting. Kid Switchblade Productions are a brother-duo team of writer/ director, Andrew “Drac” and Jamieson Child (who you know as Rupert Cadell in our recent production of Rope). They are drawn to the dark, sleazy, horrific and hilarious, producing all things 1970’s low-budget cinema inspired. Previous original shows include No Commercial Interruptions (2010) and Sister, Sister (2009).

In order to expand the show, we need a new composer;

POSITION INFO: The composer will be responsible for the entire score of the musical, and may be asked to come on as music director as well. There may be an opportunity to assist with the writing of some lyrics. As this is a low-budget production, funding is relying significantly on fundraising and grants. Payment will depend on the success of these funding ventures and may only exist in a profit-share format.

* Ability to work quickly and effectively

* A positive attitude and sense of humour

OPPORTUNITY: The successful candidate will have an opportunity to be a key part of the creation of a new Canadian musical.

HOW TO APPLY: Send a resume along with a cover letter highlighting your musical experience and detailing why you would like to be involved with this production. Samples of previous work (score, video or cd) are strongly encouraged. Submissions should be sent to:

We thank all applicants for their interest; those selected for an interview will be contacted mid-January.

Keep an eye on our facebook page for show updates!