In honour of Mother’s Day we thought we’d do a quick countdown of some of entertainment’s  most famous (or infamous) mother’s!

Sara Taylor and her daughter, Elizabeth, 1937

Elizabeth Taylor was raised to be a star. A natural born beauty (with violet eyes and a double set of eyelashes), Taylor was pushed by her one-time-actress mother, Sara, to be a perfect performer, and was enrolled in singing and dancing lessons by the age of 2. Sara kept Elizabeth’s focus on acting, so that by the age of 17, the girl was a beautiful star and a huge talent, although unable to count without using her fingers. At 16, Elizabeth apparently begged to be allowed to have a “normal” childhood, and her mother’s response was, “But you’re not a regular child, and thank God for that. You have a responsibility, Elizabeth. Not just to this family, but to the country now, the whole world”. Talk about pressure! (read more here). 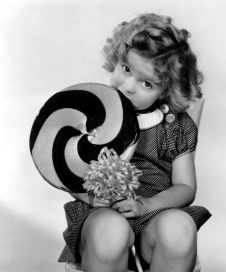 A frustrated, wannabe dancer, Gertrude Temple was priming Shirley for the stage even before the girl was out of the womb. While pregnant, Gertrude played music in hopes that it would give her daughter an artistic bend. When the little girl showed she could tap rhythmically to music at the young age of two, Gertrude quickly signed her up for lessons. Despite the early pushes, the Temple’s did try to give their daughter as normal a life as possible, and wisely invested the money she earned, so that at age 21, she retired from the entertainment industry and went into a life of politics. (read more here). 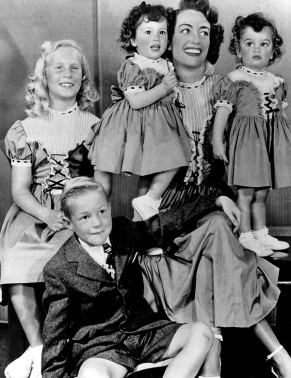 Joan Crawford and her adopted children

Anyone who’s seen the cult classic Mommie Dearest knows that Joan Crawford wasn’t exactly “mother of the year” (“NO WIRE HANGERS!!!”). Growing up in a bleak and loveless childhood herself, Crawford was desperate for children, but never had any biologically; she adopted 5 in her lifetime. Crawford had the reputation of being a strict disciplinarian, even stating herself; “I was a strict disciplinarian, perhaps too strict at times, but my God, without discipline what is life?”. She was known to overload her children with chores and limit gifts in order to keep them from growing up “spoiled Hollywood brats”. The most famous of Crawford’s children, Christina Crawford, attempted a showbiz career herself, and depending on whose side you believe, was either a poor abused girl, or exactly the spoiled brat Joan worked so hard to avoid. (read a rather biased account here). 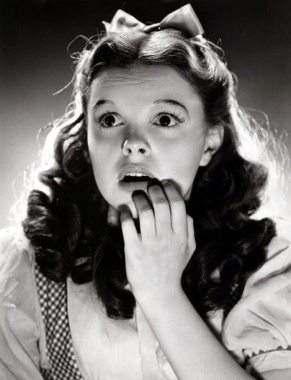 Any Judy fan knows at least half a dozen horrific stories about her mother, Ethel Gumm. Put into her family’s Vaudeville act, The Gumm Sisters, at the age of 2, Frances Ethel Gumm (later Judy Garland) grew up onstage. Ethel pushed her youngest daughter the hardest, and that, combined with the fact that Judy obviously had more raw talent than her older sisters, can be attributed to the start of her career. When Judy signed with MGM at age 13 she was thrust into the life of a starlet by day, but still went home to her mother’s house and strict rules every night. Ethel was eventually banned from the studio lot, and when Judy was older and married her first husband, she and her mother became estranged.

It’s somewhat fitting that when trying to search for a picture of Mama Rose, I find it nearly impossible to track a real one down. Instead, photos of Angela Lansbury, Rosalind Russel and Bernadette Peters flood the google image search, as I find dozens upon dozens of stills from the classic musical, “Gypsy”. Despite Rose Thompson Hovick’s unrelenting desire to be a star her face now is virtually unknown, and her name is practically synonymous with “nasty stage mom”. The mother of two famous ladies, actress June Havoc and burlesque star Gypsy Rose Lee, Mama Rose spent her life trying to live her dreams of fame through her children. If you read Gypsy’s memoir, you’ll find horrific stories of neglect and borderline abuse, and while daughter June had much nicer things to say of her mother, neither were about to nominate her for “mother of the year”.

Of course, most of us area lucky to have much more loving, supportive (and sane) mother’s than these. So to all the great moms out there, Happy Mother’s Day!