The other day I wrote a post about how to remove the tarnish from old brass things, and today I’m going to do the opposite and try to make a faux tarnished look on some cheap dollarstore trophies! Time to get down and dirty with a sharpie and some paint.

I started off with this plastic trophy; $1.50 from Dollarama:

It’s got the right shape, it’s light weight, can’t break, and but-by-gosh the price is right, but it’s got a cheap shiny finish that looks plastic, even from a distance.

Now, these trophies are supposed to be a few years old (after all Tony Wendice retired from tennis a year ago, so they are all at least a year old) but they aren’t ancient, so I don’t want them to be too tarnished or rusted or anything. Since I have a few of the same style, I thought I’d try to show them aged differently, as though he’s won the same tournament a few years in a row.

My first step with the older looking one was to add some dark tarnished looking bits around the details. I started off with a sharpie to get it exactly where I wanted: 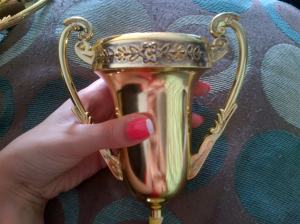 I also dulled down the gold with a bit of silver sharpie. It doesn’t show up well in a photo, but basically all it did was make it a little less shiny, while still looking metallic.

Next, for some broader strokes, I got out the black paint. I applied it using a very dry, rough brush, and added layers slowly, often wiping some away with a kleenex. Tarnish builds over time, so you need to take the time with this step as well! It should look layered in a way.

I put that one aside for a bit, and started on the newer looking one. For this, I still wanted to get rid of the shine, but not by using as much black, so I got out some metallic paint that I had: Dynamic Metallic Latex Paint by Paint Wizard. It had more of a sparkly finish rather than a glossy look (though of course not like glitter, that would look worse). I sort of sponged that on, like this: 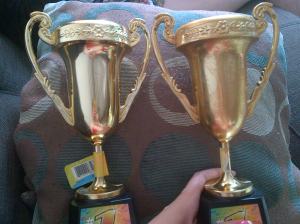 This kept it looking warm, but a bit more like a metal. Since it’s also supposed to be aged, I added some black paint to this as well, but not as much as on the first one. The final products look like this:

The “Newer” Cup, The Original, and the “Oldest”

Admittedly, up close they are still not as good as buying a vintage metal one, but as those run you nearly $100 a pop, and these cost me under $5 and only about 20 minutes to make, I think this is a better solution. I still need to change the base, but that should be as simple as putting a different, less colourful plaque on the front.