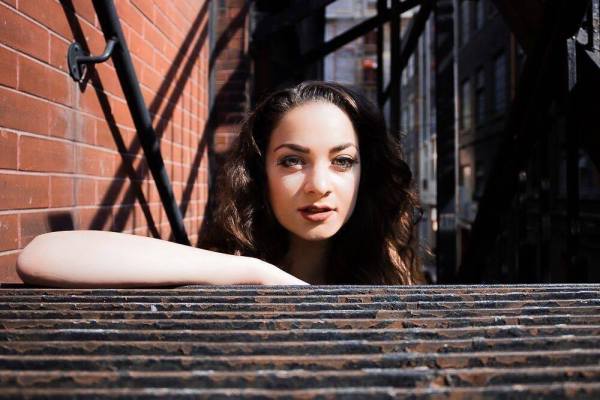 What made you want to be involved in the cabaret?

Thomas Finn is one my favourite performers to work with, and it doesn’t happen often enough. I don’t even celebrate Christmas, and I am willing to do almost anything to ham it up with this awesome human being!

What’s your favourite part of the holiday season?

My favourite part of the holiday season is watching how much happier everyone around me is. You can see the excitement in preparation for Christmas; the scent of toasted marshmallows and cinnamon, and lovely carollers singing in perfect harmony in their adorable, matching, appropriately-themed outfits makes my weeks. It’s an absolute delight.

When I was a professional caroller (the most Jewish caroller you have ever seen), my favourite memory of singing carols was when a woman came up to us and told us a story of her son who had recently passed and asked if we could sing something dedicated to him. We chose “Have Yourself a Merry Little Christmas”, and there isn’t a moment that passes when I don’t tear up thinking about how important that song was for her. It became my favourite Christmas song.

Why should everyone come see the show?

Finn & Friends shows are always a guaranteed night of entertainment and sincere fun. In the incredibly inclusive venue of Buddies in Bad Times Theatre, whether you celebrate Christmas or not, listening to Finn’s voice is worth the ticket price alone.

Anything else we should know?

When I’m not breaking my mother’s heart not singing Chanukah songs, I am also breaking her heart by being an actor instead of a dentist! (Just kidding – she’s very, very supportive). I am currently performing in Curious George & The Golden Meatball, a family musical in Toronto. I’m so thankful that Bygone Theatre, Thomas Finn, and the incomparable Larry Silverberg are teaming up to produce what is going to be a fantastic show.

Michael Barkey is playing reporter Endicott in our upcoming production of His Girl Friday; this will be his first Bygone Theatre production.

Bio: Michael Barkey, who plays the role of Endicott, is proud to join the cast of His Girl Friday. His most recent theatre role was as Marc in Sandworms! at Alumni Theatre.  His favourite role of 2016 was as Detective Carling in the feature length, sci-fi film Transmission, to be released in 2017.  Michael has trained at George Brown College, Second City, and Armstrong Acting Studios. He is a trained linguist, a licensed electrician, and has held diverse work and volunteer positions around the world.

1. How did you hear about Bygone Theatre and this production of His Girl Friday?

I discovered the casting call for the production on a casting website and applied right away. I didn’t know about Bygone Theatre before this but it’s clearly one of the best companies in Toronto!

2. What made you want to be involved? / What do you love about the story?

His Girl Friday is hilarious, see, and I love a good laugh. This is a chance to work on comedic timing, accents, and period specific themes.  The story is well crafted, and has substance and social relevance.  How grand that this is a screwball comedy but also touches on some darker themes such as greed, selfishness and corruption.

At the moment, I’d say “The Big Sleep”.  Of the many amazing film noir stories, this classic stars a hard-boiled detective and has the delicious blend of an intricate plot, an undercurrent of desire and sexuality, and a cynical perspective of human nature that keeps me coming back for more.

4. Have you been in a show like this before? What else might people have seen you in recently?

My most exciting recent role is in the independent, sci-fi, noir film “Transmission” due for release later in 2017.  You can find our more about this made-in-Toronto, soon-to-be-cult-classic, at the following website:

5. Why should people come and see the show?

Come to see His Girl Friday for the damn good story and come for the laughs!  Come for the fast-paced passion, deceit, and moral ambiguity. You’ll also get a steamy glimpse into the world of the newspaper business in the early 20th century, with all it’s dubious practices.  Asking questions about the media and journalism is crucial these days and boy, this was quite the chapter in the history of the dissemination of information to the public.  Anything to get the story!

See Michael onstage this March in His Girl Friday – tickets on sale now.

Want to help support His Girl Friday? Check out our newly launched FWYC Campaign to find out how! We have lots of interesting perks available, show your support of #Toronto #IndieTheatre.

Director & designer Emily Dix talks about the set for HIS GIRL FRIDAY – learn all about vintage desks!

While His Girl Friday won’t open for another 4 months I’m already busy prepping things on the production side. The budgets are set, fundraising & marketing scheduled, so now I get a little time to spend on one of my favourite parts of putting together a show (and part of why I started Bygone in the first place); designing.

Anyone who’s seen a Bygone Theatre production knows that we always do things set in the 20th century, and while there are of course budgetary restraints that don’t make 100% accuracy possible, I do work hard to get an authentic period feel to our shows, both with props and costumes, and when possible, set.

His Girl Friday is set in 1940 and takes place primarily in a newspaper office, which means that I have to find a lot of period office supplies. The good thing is, since it’s an office (as… 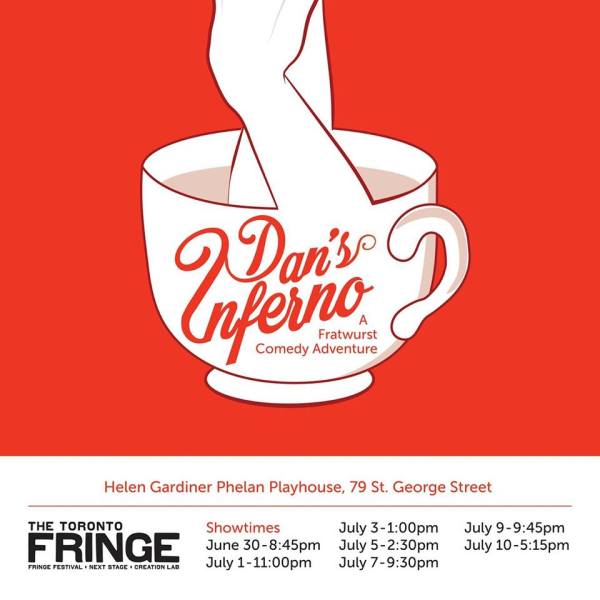 You may have seen versions of Dante’s Inferno before, but I doubt you’ve seen one with a talking toilet, and while we’ve all seen plays about the regrets we have at the end of life, chances are you haven’t seen one as strangely funny and sincerely touching as Dan’s Inferno, playing now as part of the 2016 Toronto Fringe.

Our AD reviews Behold, The Barfly! playing now as part of the 2016 Toronto Fringe Festival. 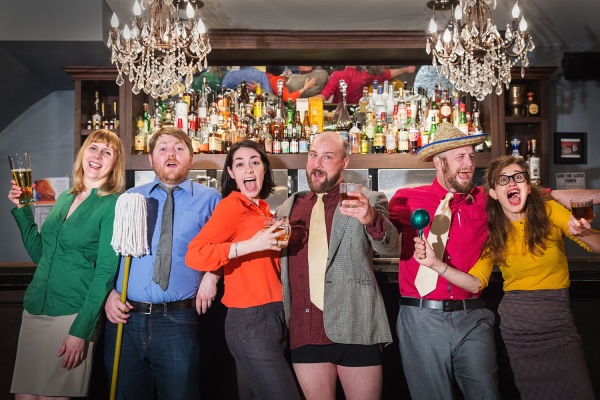 I won’t describe any of the scenes as I…

Every year at the Fringe those of us in the theatre community get very excited & very overwhelmed; it’s a chance to see everyone (many describe it as “Christmas for actors”) but also a time when you try frantically to fit into your schedule all the shows you feel you “must” see. I know there’s already a lot of “must see” lists out there but, hell, why not throw one more into the mix? These are 5 that I know will rock because of the fantastic people involved.

Check our director Emily Dix’s blog about building props for our recent production of Wait Until Dark!

I usually try to do posts throughout rehearsals and leading up to a show but this past month has been too busy. On top of my work at Tarragon and rehearsals for Wait Until Dark, I have been prepping for Vaudeville Revue, have run another Retro Radio Hour, and moved into a new apartment only 2 weeks before opening. Now that the dust has settled, I’d like to go back and highlight some of the work that went into the show, starting with one of my favourite things, prop food.

I’ve done a post on vintage labels before, a brief one that highlighted using public domain images and another with the focus on old liquor labels, but what I needed for WUD was a little different.

A key piece to the set was a fridge, and knowing it would have to be open a lot, I…

Eric Miinch plays the sinister Roat in our upcoming production of Wait Until Dark.

1. Tell us a bit about yourself, what do you do when you’re not rehearsing for Wait Until Dark?

I am a professional improviser and sketch comedian. I can be seen with my comedy troupe, Fratwurst.

I am writing my first one man show. It’s about being too good at lying.

I am training myself to lucid dream.

I brew beer and am pursuing a side career as a brewmeister.

2. How did you hear about the show? What made you want to get involved?

Justin Haigh of Soupcan Theatre informed me of the show. He is a beautiful man.

I always love playing a villain. Roat is a fascinating character with onion like layers. Robert Duvall played him in a very distinct way, but the ambiguity in the character description and…

Our AD and the Producer of KILL SISTER, KILL! A MUSICAL shares her insights on the cost of taking a show to the NYC Fringe.

If you haven’t tried to finance a show on your own before, chances are you have little to no idea how much it costs – and why would you? As an actor, you understand that money is needed for props, costumes, the venue, but chances are you don’t give much thought to the less glamourous expenses like insurance, printing fees, mileage fees, and small but essential purchases like batteries, notebooks and flashlights. If you’re only familiar with theatre as an audience member, you are likely even more removed, and may not consider how many hours goes into rehearsal for a show, and how much money it costs to rent a decent sized rehearsal space. Or the fact that your actors and crew need to be fed, need to be given print materials like scripts and dramaturgy notes; it all adds up. Fast. 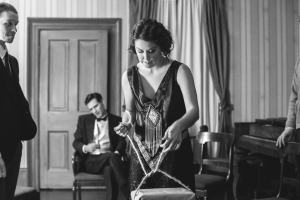 Rope was performed in November of 2015 with…